Unfortunately, my "I-Robot Roomba" model doesn't come with a remote or a scheduler to allow scheduled cleans during the day while I was out.

I had to PRESS A BUTTON before I left the house to make it clean! Not hard but I generally forgot to do it.

And heres the solution:

Important:
- A Roomba controllable by Infrared. Mine is a 521. I think most models below the 521 use similar IR codes so you might be in luck. Do a little research, there are a lot of great forums out there.

Components:
- 1 x 940nM Infrared LED
- 1 x 330 Ohm resistors (One for each LED)
- 1 x Arduino Uno (or similar, I initially used  Arduino duemilanove, but the Uno works with the same script and set up perfectly)
- 4 lengths of wire  (I used 2 wires with pins for my breadboard cut in half)

The power supply and Timer
- A power supply ( I used a spare USB cable type A/B - the one that plugs into the Arduino, connected to a AC/USB adaptor)
- A 24 hr timer switch (Cheap one from IKEA)  - This is used to do all the scheduling, just set the timer to power up the arduino

which then sends the "Clean" command to the Roomba.

I used this ir-sender circuit. 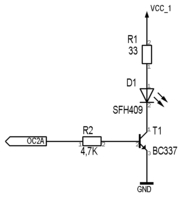 Wired to pin 3 of the Arduino; use a transistor to drive the IR LED for maximal range

Next, install the IR library from (instructions on the site) this is needed to run the script. https://github.com/shirriff/Arduino-IRremote

Basically, all the script I've pasted below does is:
- When the power is turned on
- Arduino is initialised, turns on red LED to let you know it's on.
- Begins transmitting the "Clean" (136) command repeatedly with a 5 second delay in between each transmission.
-  Doesn't stop till the power is cut!

Below is the script.....   Upload it to the board as normal.
If you're interested, you can open the serial monitor (9600) and see the Arduino's output, just transmitting the "Clean" command on repeat.

Super Simple Arduino Powerd Roomba Scheduler
by This email address is being protected from spambots. You need JavaScript enabled to view it.

Redistribution and use in source and binary forms, with or without
modification, are permitted provided that the following conditions are met:

THIS SOFTWARE IS PROVIDED BY THE COPYRIGHT HOLDERS AND CONTRIBUTORS "AS IS" AND
ANY EXPRESS OR IMPLIED WARRANTIES, INCLUDING, BUT NOT LIMITED TO, THE IMPLIED
WARRANTIES OF MERCHANTABILITY AND FITNESS FOR A PARTICULAR PURPOSE ARE
DISCLAIMED. IN NO EVENT SHALL THE COPYRIGHT OWNER OR CONTRIBUTORS BE LIABLE FOR
ANY DIRECT, INDIRECT, INCIDENTAL, SPECIAL, EXEMPLARY, OR CONSEQUENTIAL DAMAGES
(INCLUDING, BUT NOT LIMITED TO, PROCUREMENT OF SUBSTITUTE GOODS OR SERVICES;
LOSS OF USE, DATA, OR PROFITS; OR BUSINESS INTERRUPTION) HOWEVER CAUSED AND
ON ANY THEORY OF LIABILITY, WHETHER IN CONTRACT, STRICT LIABILITY, OR TORT
(INCLUDING NEGLIGENCE OR OTHERWISE) ARISING IN ANY WAY OUT OF THE USE OF THIS
SOFTWARE, EVEN IF ADVISED OF THE POSSIBILITY OF SUCH DAMAGE.

IRsend irsend; // hardwired to pin 3; use a transistor to drive the IR LED for maximal range